July 05, 2009
As I ponder what I will write this week. I felt I needed to share a bit of what America means to me and where I came from....
I was born in South America, Punta Arenas, Chile 38 years ago. My father was an American on tour with his Navy ship when he took port in the southern most tip of the world, in the city of Punta Arenas. This city is actually the most southern city of the world. Yes, it is very cold down there. The hottest summer is maybe in the 60's. The winters, from what I remember, are extremely cold. You can actually take a day cruise to Antarctica. Yes, that is how far south this city is and how cold it is. Brrrrrr!
My father met my mother and married. A year later I came along and about three years later my sister came along. When I was around 6 my father wanted my mom and us girls to move with him to the states. My mom, still not knowing English, packed up her bags and her two little girls who also didn't speak any English and moved to the Midwest and about 4 years later my baby sister was born.
I remember all those years ago like it was yesterday. It was very hard to adjust and it wasn't to long before I met some little friends and started speaking English. I learned it rather quickly, but I still remember the days when I didn't even know how to say "May I use the Bathroom." There were a couple of times I wet my pants because I didn't know how to ask. I was also a very shy little girl. So mixing those two together, you can just imagine. But like I said, it wasn't long before I had friends and I was speaking English very well.
Growing up in the this lovely country and experiencing the freedoms this nation brings, I became "American" in all my ways. (I automatically was an American citizen because my father is a natural born American). What I mean by becoming American is that the Spanish language was no longer my first language but English. I sort of regret not being able to speak Spanish as fluent as I would like. I understand the spanish language perfectly, but can only speak it with an elementary vocabulary. I now am an American girl. I even married an all white, American boy. My children don't speak or understand any Spanish. I know...I wish they did. Thank God for Rosetta Stone. LOL
I still hold to heart my native country Chile and will some day love to visit again. I want my children to know their Chilean culture and their latin roots. I'm actually part Puerto Rican as well...I didn't mention that my father is half Puerto Rican and German. He grew up as a white American and learned his Spanish from my mother.
I cherish this land of the free. I am thankful for all the freedoms America offers to all their people. I am thankful that we can preach the Gospel to whomever we choose. I am thankful for the possibilities to grow in prosperity and success in this beloved country. I am glad we are FREE today.
So to say all of this....I had a somewhat great 4th yesterday. We didn't do much. We did head down south about 40 miles to spend the evening watching fireworks where my in-laws were working. They have a french fries and corn dog stand and sell their food every 4th of July at this fireworks event, along with their ball throwing stand. My husband and older kids made some great money also. My husband bought glow in the dark bracelets for $20 from a local craft store. Each tube (about 20) contained 15 bracelets. He and the children sold each bracelet for $1. In a matter of 1 hour they sold over $120 worth of bracelets. We made some nice quick cash. Honestly I didn't think these bracelets would sell for that much. Boy was I wrong, people bought them left and right. 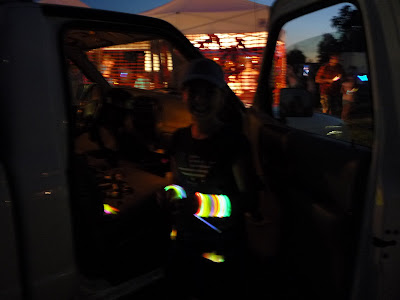 (The glow in the dark bracelets they sold) 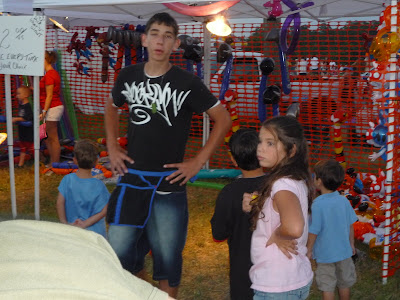 (older kids helping out and making some cash)
While they sold, the little ones and I were being eaten alive by ants. These ants were everywhere we sat and stood. It wasn't fun at all. That is why I said "I had somewhat of a great 4th". So after the children and I escaped from being held captive in these ant piles, I sat down and enjoyed the fireworks. They were wonderful. Ephraim and Ana were a bit afraid of the loud booms. That is to be expected with most toddlers and babies. They just don't understand what it is. All they hear are the loud booms and see these huge lights falling from the sky. Yeah, it can be a bit scary. I enjoyed them though. I love being able to sit back and watch these beautiful lights fall right over my head and thinking of the words of the National Anthem
Oh, say, can you see, by the dawn's early light,
What so proudly we hail'd at the twilight's last gleaming?
Whose broad stripes and bright stars, thro' the perilous fight,
O'er the ramparts we watch'd, were so gallantly streaming?
And the rockets' red glare, the bombs bursting in air,
Gave proof thro' the night that our flag was still there.
O say, does that star-spangled banner yet wave
O'er the land of the free and the home of the brave? 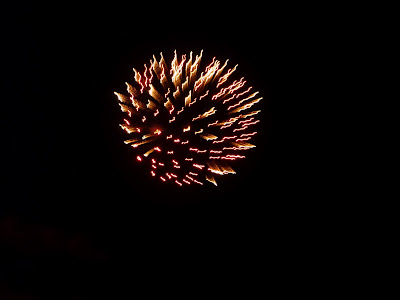 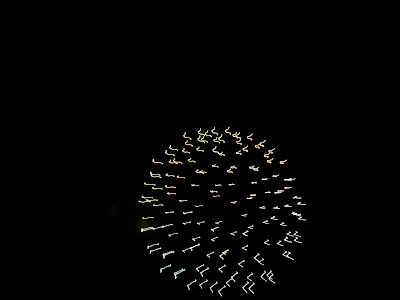 Hoping this week you all keep cool!
Until then....
Chris

j said…
Hi Chris!!! It has been awhile. I liked learning more about you. I am glad you love America too! :) Sounds like you had fun. Pretty pics of the fireworks.Hope you are well. Blessings
Jessica
July 7, 2009 at 10:29 PM

Anonymous said…
Shiloh is now 7.
And you are now more beautiful than ever.
Husband plants love note in blog, to be discovered later-SCORE!
I love you Awesome-Lips!
July 9, 2009 at 10:30 PM

Natalie said…
aww, thanks for sharing your story. It's so neat to hear where people come from and their history and what a sweet husband.
July 10, 2009 at 3:11 PM

j said…
Chris- I responded to your comment on my blog just to let lyou know. I dunno if you ever check that so thought I would tell you, go check(under comments). Blessings.
Jessica
July 16, 2009 at 8:35 PM