Parade and The Ink Baby

October 21, 2009
Interesting title you might say. Yep, I have a few things to share.
Last Friday, it was a special day in our town. Our town is extremely college football crazy, so much so, that the whole town shuts down just for it's homecoming day parade. I remember almost 12 years ago when I laboring with Moriah, I went to the my doctor's office to check in and they had gone home. Yeah, can you believe it?!! The whole staff had shut down because of the Homecoming day Parade. My goodness!! What fanatics!!
Anyway.....last Friday we had a homecoming day parade and I actually went!! I haven't been in years. I just don't do well trying to push through crowds with a double strollers and toddlers in tow. :) I'm sure some can relate. I was dreading facing the crowds with all my children. But I tought it out!!!
This year my gorgeous 15 year old son was marching in the parade with his color guard team. I had to show up. I, as the proud mama that I am, had to be there to watch him march. I had decided I was going to push through all those crazy Florida Gator fans and get a glimpse of my son. 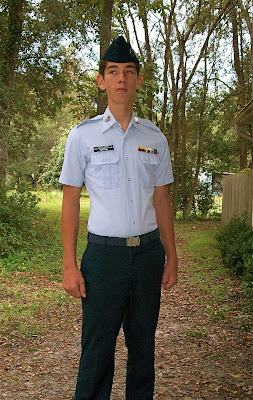 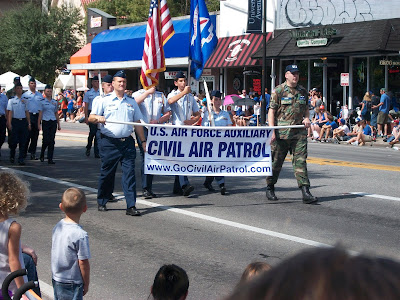 First and foremost, when Friday came a friend of mine blessed me by watching the baby for me. Thank God for good friends!! I know Ana would not have enjoyed herself out there in that heat. And yes, it was hot!! Ok, so second, I had to find Orange and Blue shirts so the children would blend into the crowd. I didn't want to feel out of place, you know?? Trust me, I am not a fanatic. I hardly ever watch a game. Thirdly, there was a slight problem!! Why...am I... wearing a RED shirt if the colors are orange and blue? I thought "I hope the team's color their playing this weekend isn't red. Ok....that would be...BAD!!" So check this out---ha ha ha---I spent almost 30 minutes digging through my son's closet, drawers, give-away clothes bag sitting in my laundry room, and finally....ahhhhh.....there it was.....a Gator t-shirt which was way to small for me to fit in....bunched in my children's dress-up box. YES!! I can now fit in at the parade!! THANK YOU LORD!! I squeezed into this small shirt and off we went.
As I drove down to campus, I had to fight the traffic and the closed off roads. I finally found a parking spot about 7 blocks away. We were in a hurry.....the parade was starting in 15 minutes and I didn't want to miss any part of it. I was determined to get there. We were speed walking by this time. I called my hubby to meet me. He was on the other side of the main road the parade was marching down. This was about 7 blocks the other direction!! Thank God for cell phones we met right up. I found a nice shady spot under the oak tree and happened to see a few friends from church. It was packed but I enjoyed every bit of it. As soon as my son marched by we were outta there.
Here are some pictures of the day. Ok.....Don't laugh at me. I didn't put any make-up on and I look way to big for that small t-shirt. ha ha Plus cameras put 10 pounds on us ladies, right??? 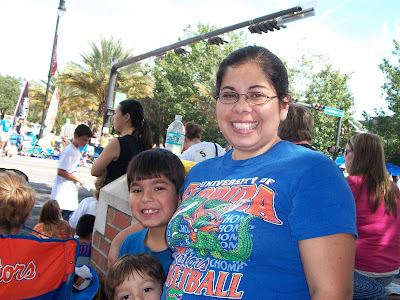 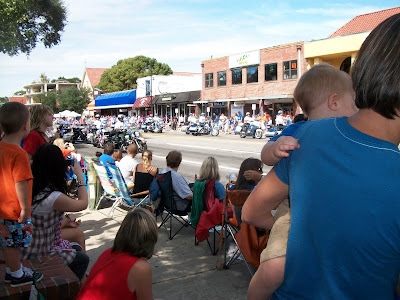 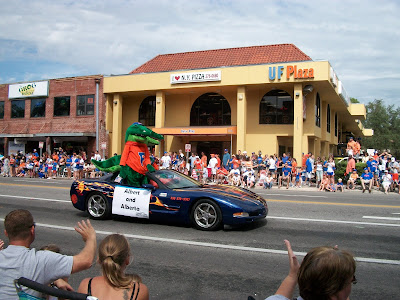 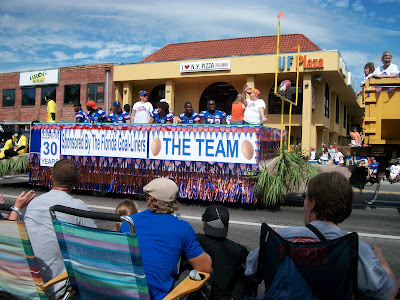 Some of the Seniors
Tim Tebow was not on this float. I don't even know if he was in the parade
If some are wondering who Tim Tebow is, well he is the quarter back and golden boy of the team. He truly is a great guy. He is a radical, professed Christian, youngest of 5 children, was homeschooled, and has an awesome testimony on how when his mom was pregnant with him, she got very sick and thought she was going to die along with the baby in her womb. The doctors were even suggesting she abort the baby. Because of their faith in Jesus, they faced the battle with much prayer and believe God for the healing. Tim was then born healthy and whole. His parents are missionaries and whenever he isn't playing football he is preaching the gospel and goes over to the Philippines with his parents. It is so awesome to have him as a role model for kids of all age. He truly has made a difference at the University of Florida. Oh, and Florida remains #1 in the US as the best college football team....
GO GATORS!!!
And for the second part of this post: ha ha ha
The INK Baby 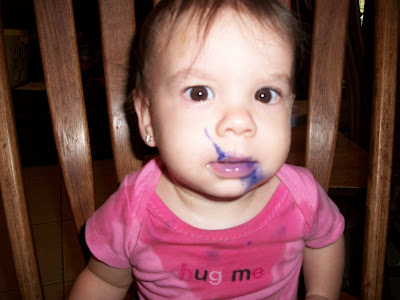 This is what happens when you are in the middle of helping your teenage son research a career path in the Marines. Everyone was busy doing their own thing and not keeping an eye on the baby!! And guess what??? The baby got a hold of an ink pen and decided to have it as an afternoon snack. Yuuuummmy!!! 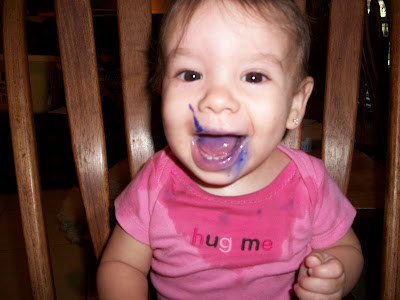 Carissa Blanchard said…
Awesome! You are a brave woman! Even if the shirt was a little snug, you were still beaming with joy! Beautiful!
October 22, 2009 at 7:45 AM

Stacie, A Firefighter's Wife said…
I do everything I can in my power to mix crowds and children together! I hate crowds anyway! You are a brave mommy! I'm sure it was worth it to see your boy in the parade.

Also, I have a similar picture of one of my boys after chewing on a black ink pad when I got distracted. Ana is so cute and smiley!
October 22, 2009 at 8:20 AM

Cheesemakin' Mamma said…
The inked baby is a familiar sight around here. So glad to see my children are normal! You're son looks so handsome. So glad you guys are a patriotic family. Good for you for going to support him and I think you look cute in that shirt!

Veronica @ Luv My Quiver Full Of Arrows said…
Honey, that is the most beautiful picture header!!! OK, now back to read your post!

Veronica @ Luv My Quiver Full Of Arrows said…
Those are some looong and beautiful eyelashes, Girl!

OK, I am really going to go read the post now...that pic just has me mesmerized!

Your son is soo handsome, Chris, but I am sure you know this all too well. We used to go to the Thanksgiving parade that is held here every year when Miguel and Kari were little, but I haven't been since our family starting having babies again. You are brave.

Aww, and look at you rockin' that Gator shirt. You are too cute, girl.

Chris Jeub said…
If I had a "Greatest Baby Pictures on the Internet" prize, this would get one of the top awards. Good for you, mom: you grabbed the camera rather than a washcloth.
November 13, 2009 at 11:42 AM