January 19, 2009
Just a quick update on Kole Freedom, my 3 yr old who had the "poopy in the potty" issues.  Well, we have reached VICTORY!!!
Shortly after his third birthday we conquered the big feat.  My very patient and consistent husband took our little boy into the bathroom and sat with him for over an hour so he could do his business.  I, personally, had to battle the temptation to not interrupt the process.  I wanted to run into the bathroom when I would hear Kole screaming and crying because he didn't want to go.  I wanted to stop my husband and say "let's just give him the diaper!" or "he'll figure it out one day soon."  Nope!!  I had to resist this temptation and pray, pray, pray for me and for Kole.  My husband just sat with him and read him books.  Finally, there was victory and he went!!  Yay!!  Now, it wasn't defeated that first night.  My patient husband had to repeat this for the next few nights.  It became less and less of a struggle each night.  Then finally the victory came.
Now, he loves going poopy in the toilet!!  He insist that he has to go EVERY time he has to use the potty.  I had to explain to him that we don't have to go every time.  He realized this after he kept straining and nothing was coming out.  :)
Kole's attitude has gotten much better.  He is happier and is eating so much better.  You see, he was holding it as long as he could.  This was making him a miserable little guy.  Life with my boy these past few weeks has been a pleasure. 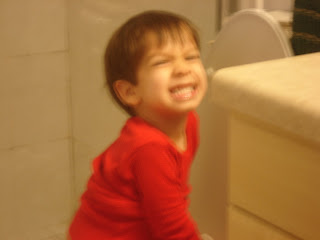 (Sorry for the blurry picture.  This was the best I could get of him before he jumped off the toilet)
Chris