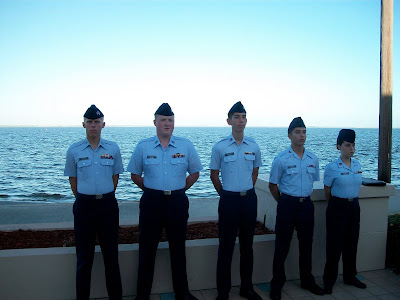 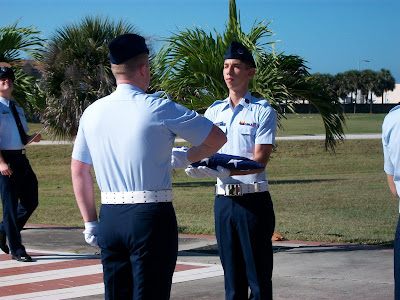 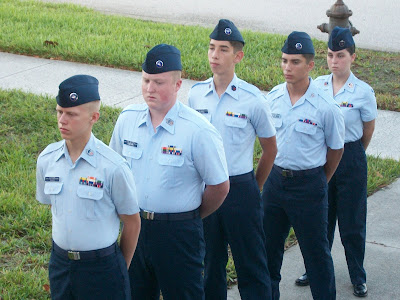 (Eades, Gwynn, Tuttle, Willis, Dowell)
Moriah is an alternate
My husband and two oldest, Justin and Moriah are at Patrick Air Force Base in Titusville, FL today for their color guard team practice. My husband has been putting in so many hours chaperoning this team. Boy, I sometimes feel like a single mother since he's either working in our home office (I call it his "cave"), at color guard practice, or youth group (he leads our church middle schoolers called NRG-Nothing Replaces God)
The kids are practicing twice as much lately since they are going to compete next weekend for regional competition. They are currently the state champs! If they win next weekend they will fly out in a few months for Oregon to compete in the National Color Guard competition for Civil Air Patrol. I feel mixed emotions about this whole thing. Part of me wants them to win because they have worked so hard, and then the other half of me wants them to lose. I know isn't that horrible? I guess the part of me that wants them to lose is more selfish in nature because I am left with over 20 hours a week to care for the kids on my own since it is taking my husband and my older two (who help alot) out of the house so much. Donnie has mixed emotions also....but of course he would love them to get the regional trophy and go on to Nationals.
As for now, we'll see what happens. They left this past Friday and should be returning in a few hours. My husband sounds wore out and ready to have some home time and wife time since he's been around 4 rambunctious teenagers and our sweet Moriah all weekend. LOL!
Not much else is going on other than "trying" to manage my house the best I can. Many times I wonder.....soon enough I will know how to do this without having to struggle so much. Maybe I'm just making it bigger task than what it really is? I don't know? Either way......life goes on (remember that show?)
Until next week when we find out if the team won or not.......
Chris

Carissa Blanchard said…
I can totally understand those mixed emotions! The team looks great! Glad your hubby is coming home! I know you must miss him so much!

Stacie, A Firefighter's Wife said…
I know what it is like to be by myself a lot with lots of little children! It is tough. For me it is easier to not expect help for the whole day. That way if he does happen to be around and helps, it is a surpise and I am not resenting his being away. I think disappiontment is all about our expectations.
March 22, 2010 at 7:48 AM

Anonymous said…
We won! Off to Oregon. I promise to find somebody to share the burden of getting them ready for the big competition.

Moriah said…
Mom, you know those pic's are from last year..you should upload the new pic's! ;D

February 04, 2021
Since returning to blogging, I'm finding some drafts lost in the archives of this ole' blog.  It's interesting to read and think about the day, time, year....when I wrote this specific post. What was I feeling? What was I thinking? This specific post was drafted on March of 2016...Ana was around 7 years old. That was almost 5 years ago! This sweet little girl turned 12 last week.      As I read through the post, I remember that feeling of "rushing", a lot of it was in my mind but I also was rushing...kids to school, boys doing some sort of sport, Ana was taking dance, helping kids with homework, no need to go on.  You get my point.  This was 5 years ago!  This was a year before we left our town Gainesville, Florida to explore the United States and Mexico.  A lot has changed since then and looking forward to catching you all up on everything. So here we go... Most of the time I find myself barely living in the moment.  That's if I don't purposely try to liv
Post a Comment
Read more