November 17, 2010
Wow...I can't believe it has been longer than a week since I posted anything.  Actually the last post was really a prayer request for one of the local mothers in my small town.  Oh what a week of sadness.  I continue to think of this mother and just pray for all of them, including the firefighters who were doing the rescues.  I have found myself shedding a few tears now and then.  I just can't even imagine how she is even getting through with it all.
The town has been so supporting.  They have raised money by having a fish fry.  They had a candle light vigils.  The local cemetery donated 8 plots to their family.  All funeral services were covered in full.  The largest church in town opened their doors to have a memorial service for them.  I wasn't able to attend but read and heard all about it.  The house still remains all charred and in ashes.
The saddest thing of this whole ordeal was reading on how the firefighters were not able to rescue the boys out of the home because the house was up in flames and the firefighters would have been risking their own lives if they had gone back in the house.  They had to retreat when they heard the evacuation call.  One of the firefighters said that all of his heart, soul and might didn't want to retreat but he had to, otherwise his own 4 children would have been fatherless.  Wow...I can't even begin to imagine even the heartache the firefighters are going through also.  Only by God's power can they be mended.
In other news....I've been thinking of how I need to get back to blogging.  I wonder what I would blog about....?  I sometimes wonder if people even care what I say.  I know that's not true.... that there are many of you who read....who enjoy reading what I'm going through and what I have to say.  Even when I think I have absolutely nothing to say.  I just RAMBLE.  Like I'm doing right now.
So my husband says that when I type in this pyramid form of centering my text is rather dumb.
Well he didn't say exactly in those words.
He just said that it doesn't make any sense to type this way and it rather confusing.
I sorta like being a bit different.
I like reading blogs that are a bit different....so I want to be different.
Does that make any sense at all?
Probably not.
It sometimes good to ramble and to be annoying.
I don't know....maybe it will make life a bit more interesting to be a bit bizarre.
But then who will read my posts.
Probably lose some of my followers because you all would think I have lost my mind.
Maybe you don't like my pyrimad centered typing....maybe you do.
Don't worry you don't need to leave any comments telling me if you like it or not.
I don't want to hear it if you hate it and think it's plain old annoying.
Ok...now back to being a bit normal.  I have been busy this month making a thankful banner.  I thought  I needed to be a bit more thankful.  I was inspired by Mrs. Taffy at My Life on A Taffy Pull.  She started a thankfulness challenge.  I thought.... I've been complaining way to much when there is so much to be thankful for.  Then I envisioned listing several things I am thankful for....cutting out paper pumpkins, leaves, and hands....and writing these things on each one of these cut outs.    The children also shared what they are thankful for and voila...the wall of thankfulness was birthed. 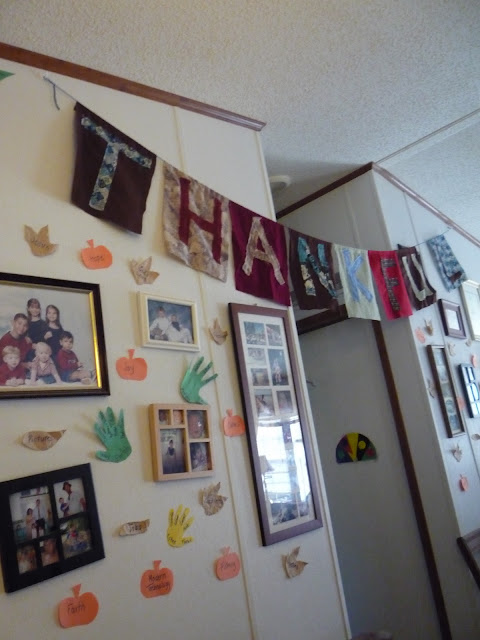 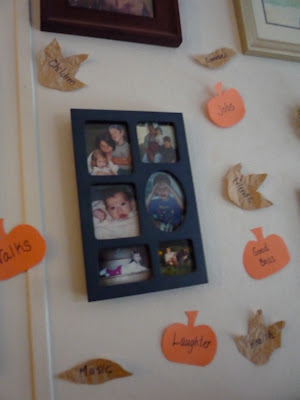 It will stay up for this month or until I create something for next month.  Yeah....I've been in the crafty type of mood.  It's also good to just sit there and read all those things we are thankful for while we eat dinner. 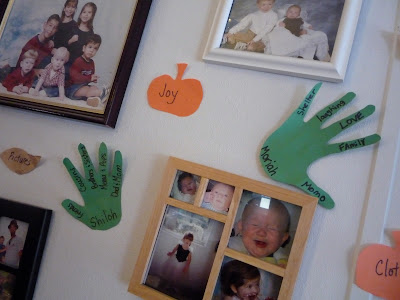 Ok...I best get going.  I want to post more frequently and maybe to just RAMBLE.  Why not?  Right?  Maybe I just might get more comments or more followers.  You never know..... 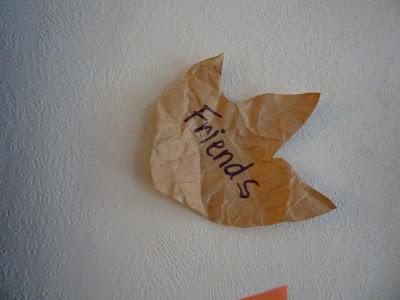 Cinnamon said…
For starters I bought 4 fire alarms and asked my son to install them. I've already set them off with my cooking one morning :-)

My heart did ache for the lady as well. I told all the children about it. My brother is a fireman and as you said what a heartbreaking decision to make.

Now, I like your pyramid centering writing. After I all, that's what I do on my blog :-)

And yet I enjoy your ramblings~

Coby said…
I just read your post about the woman losing her children, and that just makes my heart ache. I will most certainly pray for her. I can't even imagine...What a wonderful thing for the community to step in and help her!

Hey, sometimes you need to ramble and unload your brain! Nothing wrong with that! Thanks for your sweet comment on my blog!!!
November 18, 2010 at 12:21 AM

Carissa Blanchard said…
How could anyone not like you and your unique way of writing! I for one LOVE IT and I LOVE you too! :) Nothing would make me happier than seeing you blog more, you don't have to write about anything in particular...you are interesting enough when you ramble! lol

Yes you should post more!! I've been rambling a lot lately too and it's soooooo theraputic!!!

Anonymous said…
aww! so glad to here you'll be back to blogging more often. You did give me a good little chuckle. That thankfulness wall is such a cute idea.

Stacie, A Firefighter's Wife said…
The firefighters did the right thing. It was a hard call. They hardest they have to make, because they are trained to go in while others are going out. They cannot be foolish about it though. They knew they would be wasting their lives if they went in there and destroying their own families in the process. How sad and i pray that they will be able to get through the survival's guilt that so often hits.

I continue to think about this family and am so pleased to hear how the community has rallied around them. I pray they can see God through out this. It must be hard to not be angry.

I have not been blogging as much. Trying to be good about not being sucked into it all. We have had lots of discpline issues around here and I have to keep my head in the game. I am going in spurts now, usually in my insomnia moments. I also do a bunch of posts at one time and schedule them out. That helps me a lot.

I hope all is going well with your little adventure and you will be able to have your own home soon.